Why be a Leader in the Church?

When you answer the call to be a leader in your church denomination, you will find your place among others who serve Christ. This article is focused on the denomination of the General Conference of the Church of God (Seventh Day) or COG7, but the points of the article that focus on serving in your church and the challenges Christian churches face today may be applied to all Christian denominations.

“But seek first the kingdom of God and His righteousness,”[1] are words many Christians have heard throughout their years attending worship services. Most could even recite the words of Jesus from memory. Unfortunately, these words could remain only words without a total surrender of one’s life to God’s will, that calls people into service. This call to be His leaders within our circles of influence is both universal and unique.

ADD YOUR NAME TO THE LIST OF VALIANT MEN AND WOMEN

Today, the attractiveness of Christian leadership is on a decline along with religiousness in the American culture. But like many of the great leaders found in the Bible, who stood up for the truth in the middle of adversity, Christians today can add their names to the list of valiant men and women in the Book of Life by becoming a leader for Christ. Fortunately, all who desire to answer this call will find room to serve in the General Conference of the Church of God (Seventh Day) in which they will never find themselves alone in this spiritual battle. 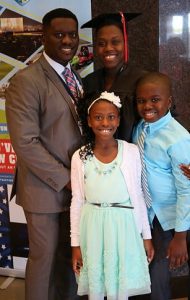 Families become leaders in the church

Since its beginnings, leaders of the General Conference have fought, figuratively, to seek and maintain the truth found in the sixty-six books of the Christian Bible. In the first issue of The Hope of Israel, published on November 15, 1863, Enos Easton outlines ten biblical principles that began defining “the Bible and the Bible alone” as the final authority for believers[2]. It is important to note the willingness of the founders of the Conference to swim against the strong doctrinal currents at the time.

WILLINGNESS TO STEP UP WHEN IT COUNTS

Although Easton would only serve as publisher for the first issue of the Hope, in this temporary assignment he would begin to shape the Statement of Faith of the Conference today. Even though Easton would not see the full extent of his influence on the world, he displayed the willingness to step up when it counts, a quality needed in contemporary leaders. Today, the Bible Advocate, a successor of the Hope, is distributed by the thousands worldwide.

The desire to defend the truth is in the DNA of Conference leaders since its conception. The ten principles published by Easton stated the very reason Gilbert Cranmer, the founder of the first CoG7 state conference, severed his ties with the Seventh Day Adventists over the heresy of Ellen G. White’s visions. This decision by Cranmer, who was a respected minister of the Seventh Day Adventists, could not have been an easy one.

A SPIRIT OF POWER, LOVE, AND A SOUND MIND

In this decision, one can see how God has given us a Spirit of power, love, and a sound mind that will empower those that seek to listen to God’s will through His Word, the Bible. Today’s leaders can learn from Cranmer’s leadership in making unpopular decisions, desiring to follow Jesus wholeheartedly.

Like Apollos who watered what Paul planted[3], leaders over the years have watered what Cranmer planted. Over its more than 150 years, the Conference has grown both as an organism and an organization. As an organism, the church has diversified. The General Conference, which started as state conferences in Michigan and Iowa, has expanded to 36 of the contiguous 48 states and 3 Canadian provinces.

This expansion has brought with it ethnic and cultural diversity into the Conference. For example, today the difference in number between English and Spanish speaking congregations has vanished. To harmonize the efforts of an increasingly diverse group, the Conference has also grown organizationally.

ORGANIZATION OF THE CONFERENCE

Through its bylaws, the Conference outlines its structure and organization to effectively promote the gospel of Jesus, receives members who believe in the gospel and express faith in Jesus, and receives funds and holds property to support its objective. Additionally, roles and responsibilities are outlined for the many entities within the Conference, which are composed of members serving at the local, district, and national levels.

In this organization, the district superintendents and local pastors serve as the link that connects the local members to the national Board of Directors and ministries of the Conference. To help achieve the vision set forth by the president of the Conference, the pastor-district superintendent link promotes synergy among churches residing in one of seven districts in the US and Canada.

STATEMENT OF FAITH AND DOCTRINAL UNITY

To maintain its beliefs relevant to the national membership, the Conference and its ministers continually review and update the Statement of Faith via the North American Ministerial Council. Within this council, pastors and evangelistic programs are developed, doctrinal studies are initiated, and ministerial documentation extended to candidates who qualify. This body works in conjunction with the International Ministerial Council, which coordinates the evangelistic effort of the church and promotes doctrinal unity among its members.

More than just polity, the bylaws of the Conference are employed to create synergy and an organization with healthy checks and balances. Composed of many small churches, the Conference can achieve its objectives through the combined contributions of the many congregations it serves. For example, resources such as the Bible Advocate, which has been around since the beginning of the Conference in the late 1800s, is feasible only through a joint effort to fund the ministry.

Additionally, congregations benefit from biblical literature available by the Conference, some even free of charge. Finally, through the structure and organization of the Conference, leaders can join forces in battling national issues. Through the creation of a Conference vision, counterproductive trends to the Gospel can be identified and a plan created to address them.

THE VISION OF A VIBRANT 21ST CENTURY CHURCH

With the increasing number of congregations in the Conference over the years, there has been a need to develop a common vision for the Conference to help congregations be more impactful. To this end, former Conference president Whaid Rose developed a ten-point vision of a Vibrant 21st Century Church (V21CC) in the 1990’s. With these ten points, president Rose refocused the attention of the membership on Christ as Lord and Savior, the Great Commands, and the Great Commission.

Unfortunately, after 17 years of implementing this vision, the Conference did not make the progress it sought. In 2015, president Rose’s successor, brother Loren Stacy built on this vision by proposing the three-step Turning Vision into Reality (TVR) process. Starting in January 2017, the Conference began this new journey. It first focused on the church’s identity in Christ in a stage titled Justification.

In the first stage, Justification, the church sought to find its identity in Christ. The second stage, Sanctification, built on the first by challenging the church to build the harmony of grace and truth, becoming more like Christ. Finally, in 2019, the third stage, Loving Obedience, the vision was implemented into the everyday lives of congregants, focusing on sharing the love of Jesus by living the Great Commands and Great Commission.

Although it has taken many years to implement, the V21CC vision has made large strides in recent years with the help of the TVR process. While not all congregations made the same progress, those that embraced the vision and the process benefitted the congregation and the community it serves. What made this vision and process most impactful is its biblical foundation. Additionally, a great deal of work was done to create a plan that would address the religious decline America is facing.

Throughout the years, congregations and leaders in the U.S. and Canada were empowered by the material provided to them by the Conference, describing the vision and outlining the process. Sabbath School quarterlies, posters, brochures, and national tours rolling out the plan were provided for leaders that chose to join the battle against religious decline.

NEITHER RIGID NOR RESTRICTIVE

While the plan was robust, it was neither rigid nor restrictive on the congregations or leaders it served. Instead, leaders were able to preach and further develop the material provided by the Conference. This helped leaders realize many of their issues were not unique and others were on their same journey.

Analysis of contemporary American religious culture shows a slow but steady religious decline. To best serve the community, religious leaders must be observant and in tune with cultural trends in America. The trend a local leader observes in one part of the country is likely the same trend observed by another leader elsewhere.

ANALYSIS OF DATA SHOWS THE CHALLENGES AMERICA IS FACING

For example, an observant leader with time in the ministry may notice the decrease in religiosity in America over the last fifty years. Data, collected by sociologists like Mark Chaves, also proves this point. Analysis of poll data from the General Social Survey (GSS) and the National Congregations Study (NCS) shows the following challenges:

While these trends show the challenges contemporary Christian leaders face, the survey of the cultural topographical terrain can provide leaders an opportunity to be more effective in ministry. 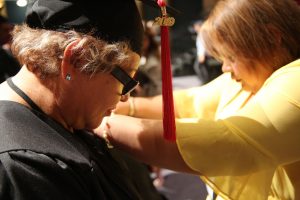 Graduates of Christian colleges become leaders in the church

THESE CHALLENGES CREATE OPPORTUNITIES FOR LEADERS

Although these trends may seem to create a tantamount challenge, they actually create opportunities for leaders listening to God’s voice, seeking to find a new creative way to share the gospel of Jesus Christ today. For example, with an increased diversity comes an increase in ideas and gifts within one congregation. While only a few years ago, a congregation only sought to serve one demographic, today the same approach would limit the congregation’s growth.

CHRISTIANS LEADERS CAN STAND OUT!

The opportunity for leaders and their congregations to be distinct yet inclusive could be the key to growth. Similarly, the use of technology can help with the decrease in religious involvement, manifested in weekly attendance. While it is important for people to continue to gather together with other believers in weekly worship, those who are prevented from joining a weekly service can now do so online. Last, the decrease in confidence in leadership can in fact make Christian leaders stand out. While the world’s leaders prove people’s skepticism true, Christian leaders can and must be the exception by remaining centered in Christ.

While the Conference and its leaders look different today than in 1863, in the middle of its diversity, the leadership of the Conference continues to seek the same truth brothers Easton and Cranmer sought. Like them, leaders today are called to make unpopular decisions to preserve the truth. Fortunately, leaders that decide to join this fight will not be alone. They will find support in the organization of the Conference, which combines the efforts of many brethren throughout the world, to promote the gospel of Jesus Christ.

CHECKS AND BALANCES IN THE STRUCTURE OF THE CONFERENCE

Thanks to its polity, leaders today can find rest in the checks and balances inherent in the structure of the Conference. Additionally, with the help of the Conference’s V21CC vision and the TVR process, leaders can be inspired and empowered to work towards a common goal with other leaders, knowing that the challenges of one are shared among all leaders throughout the country.

Finally, it is appropriate to remember that God’s mission for the church has already been laid out in the Great Command, found in Matthew 28. It is now the opportunity for Christian leaders today, especially young leaders, to be part of this mission. Those that take on this challenge can look forward to the second coming of Jesus Christ, when He will receive those that answer this call to leadership with the words: “Well done, good and faithful servant.”[4]